Debate boils down to Python guy making fun of Perl guy for known Perl cruft and twarts. On the other side Perl guy is saying. We pioneered this, we pioneered that, we pushed the envelope on this… You can say that he could not care less about counter arguments since he is looking forward and not fixating on the past.

That made me wonder. I am already leaning toward “more-is-better” for syntax sugar school. I guess most people are, that’s why majority feels Lisp looks a bit oatmealish. We as humans are capable of graphical mappings. The Chinese grapheme system is proof of that. If you ask me my honest engineer opinion on that system and assign me a task to work on it I would probably like to see the authors of it dealt with like this. Nevertheless it seems to be working nicely for the Chinese.

Maybe it’s the same with Perl guys. That’s why they don’t mind when some Python guy makes fun of them with arguments:

You have 6 options, we’ve chosen to implement half of the third one. That’s why we are superior.

After learning Perl 5 I was feeling like Matz lifted all the good stuff from the Perl while not going wild on syntax sugar. It felt like purified Perl that has stolen Smalltalk messaging system in which the object orientation was not an afterthought. Suddenly Perl was worth a lot more on my scale. (Simultaneously I was able to pinpoint that Python feels like Ruby that hates Perl and therefore lacks all the goodies my heart longs for.)

I toyed with Perl samples and I was able to get results in Ruby with similar LOC. Ruby just felt a lot cleaner, especially in OO department and at the same time didn’t lack much feature/freedom/syntax sugar wise.

But the elusive Perl 6 that is being made fun of since late 2001 is a different story. I mean they’ve changed everything. When Larry Wall jokingly says that they plan to leapfrog all the other languages I think he is not joking at all.

After using Rakudo Star and reading through language overview I am impressed. So many interesting ideas made my head spin.

As far as I am concerned they are pushing the envelope on these things:

And also they’ve catched up on:

Is Perl 6 Utopia? I hope not. Sure it’s easy to make fun of them for getting stuck because of “second system syndrome” and going insane with the features. BUT if they pull it of it has a potential to become the next great rewrite success story similar to OS X from NeXTSTEP.

Unit that Perl 6 can be a great inspiration for some amazing features that can get added to your language of choice.

On a side note it still puzzles me why is Python the only one without blocks. I mean everybody and their mother, including Objective-C has blocks syntax. Are anonymous functions not worthy of having proper representation. 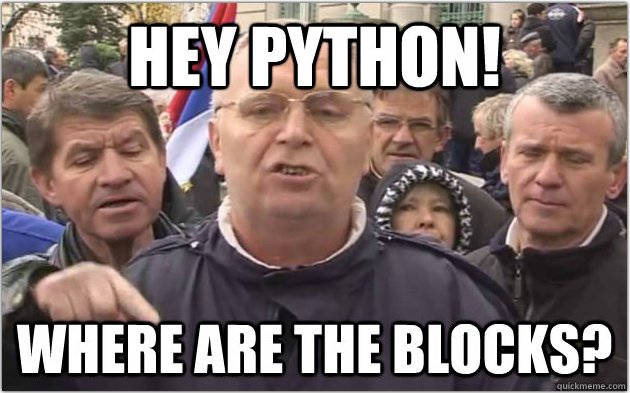